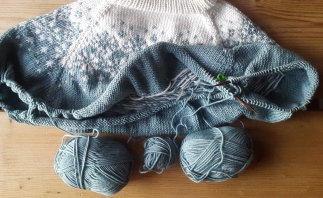 Knitting a sweater on a single set of needles! 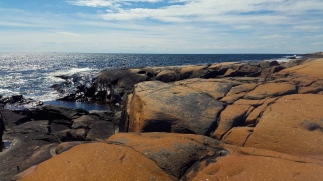 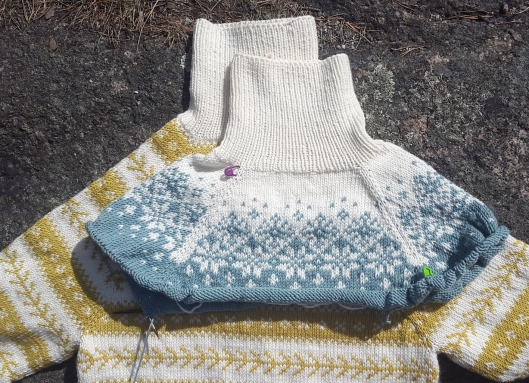 …and you have brought a big- sweater-knitting-project but find out that the needles for the sleeves are left behind…, then what do you do?!?!

Well, as I knit this sweater top-down with a raglan-like increase (the same way as the previous; Skiing in June), I decided to try something I have not done before. I have seen people knit two socks at the same time on the one pair of flexible needles, which makes them really similar. Aha! I thought; the same should be applicable to body & sleeves. So when I was supposed to divide the stitches for the body and the sleeves I inserted ten new stitches (in the armpit) but kept them on a separate needle. 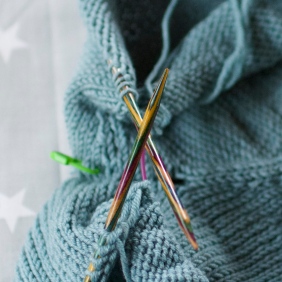 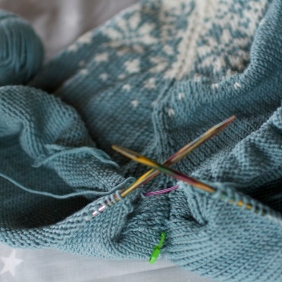 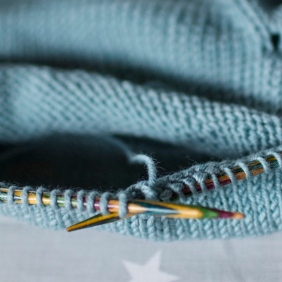 Then I used three skeins/balls of yarn; one for each sleeve and one for the body. When I had knit the front of the body, I knit 5 of the armpit stitches, then switched to another ball of yarn and knitted the five stitches one more time (but “backwards”) before knitting all the sleeve stitches. Further, I knitted the last five stiches of the armpit stitches, switched back to the previous ball of yarn, knitted the five stitches once more (“backwards”) and then the back of the body. Did the same for the other 10 armpit stitches (but using the third ball of yarn). It was a bit tricky the first rounds, but then it went smoother! I do not think there are any advantages in doing this, except that I am still on our summer island and the sweater is almost done…without my favorite sleeve needles!

7 replies to When on an island…

Find my patterns at: