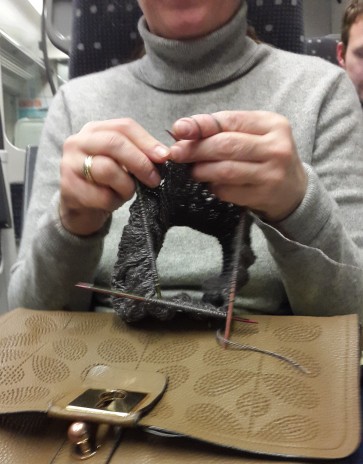 Knitting at the Stansted express

So little time for knitting these days, but a weekend trip to London with my mother and my daughters made room for a few small projects! London is less than two hours away from Oslo (by plane!) but when you include train/bus to get to and from airports, it is plenty of time for knitting!

I did not have any projects suitable to bring (I am working on my biggest stash project ever; a blanket which is more then 2/3 done…and thus very big!) so I decided to make one of the most beautiful hats I know of; the “Rustling Leaves Beret” by Alana Dakos.
I got the book it was published in (Costal Knits) last year but have not made anything from it so far.
So I grabbed some leftover yarn (Sandnes’ alpaca and silk, grey, used in my Vintage jumper), suitable needles and took a photo of the pattern.
The pattern is fun to make and the hat was finished during the trip and the first day in London, but I realised that the choice of yarn always matters… 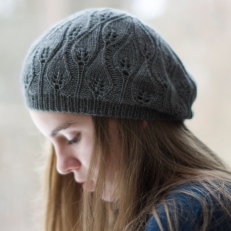 it was not a total disaster, but the structure pattern and the type of beret really deserve some more firmly spun yarn. I could not convince any of the girls to make a trip to a “real” yarnstore in London but at John Lewis there was a decent choice of yarn.

So during the next day and the trip home a second hat was knit in Debbie Bliss baby cashmerino (the red one).

After washing an blocking (using a dinner plate), both of them actually turned out pretty nice!

6 replies to Rustling Leaves in London

Find my patterns at: